Interview with Tuomas Holopainen, from Nightwish

On 1st December we had a chance to interview Tuomas Holopainen, keyboardist, composer and writer of Nightwish before their concert at St. Jordi Club, Barcelona. If you want to read the chronic of the concert we published it here.

Nightwish is a metal band created in 1996 in Finland. It’s one of the most iconic bands of their genre with a great career after nine albums and more than twenty years of existence. Despite time and changes in the band’s formation, the members’ cohesion goes beyond the musical area. There is a true connection that the band brings to their audience to generate a true experience. Without any doubt, Nightwish trascend music.

After a brief time with Tuomas I get the feeling that we could have been talking for hours and that this interview needs to be continued for a deeper conversation on motivation, life and all the particular details that surround his creative process. 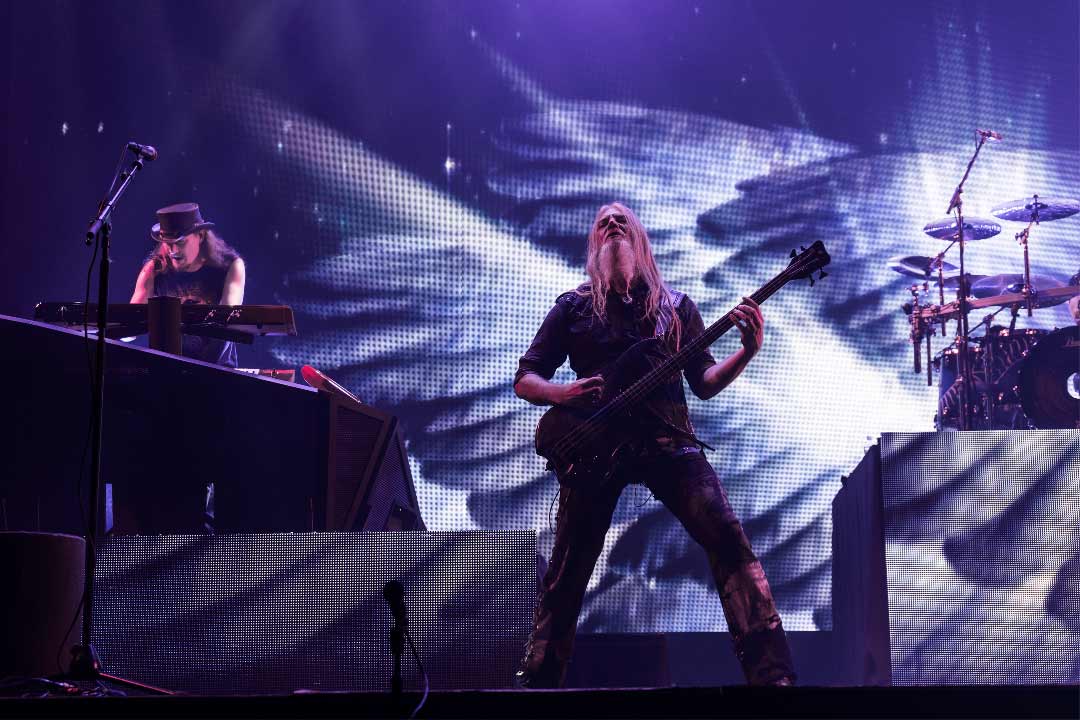 Could you give us a biography on your own words?

It is hard to tell it shortly. The band started as a hobby between three high school mates: Tarja [Turunen, former lead vocalist of the band], Emppu [Vuorinen, guitarist of the band] and me. The idea was to make acoustic campfire music, just for fun.

Back in those days Tarja wanted to be a professional singer, Emppu had his own ambitions and I wanted to be a marine biologist. Then we just started to realize how fun making music was, so we decided to give our other ambitions a break and concentrate for maybe two-three years on this project called Nightwish. We are still on that road nowadays.

What is something they have never asked you and you think the world should know?

I think I must have done about 17.000 interviews so far, so pretty much everything has been asked… at least about the facts that should see daylight.

What are your main inspirations? Is there any particular experience in your life that has been specially inspiring?

I was eleven months an exchange student in Kansas and the thing that really changed my life during that period was seeing Metallica and Guns n Roses live, it completely changed the kind of music that I was listening to. Until then, it was all classical and Finnish pop. After they dragged me to that concert and Metallica played their first song, which was The Shortest Straw, I got hooked for life.

Inspiration can come from anything. I want to do songs that are really personal, little bits from my own diary of life. I may find something really personal, either good or bad, something that I need to get out of my system, then I create a song, our albums are full of those. But also there are things that are not personal but really interest me, like the story of the Native American Indians or, for example, in this new album, the beauty of the nature of reality and the universe. It’s not something personal, but it’s something that I really fancy and I am deeply interested about it.

You just want to tell stories that somehow affect you. You want to get it out of yourself. 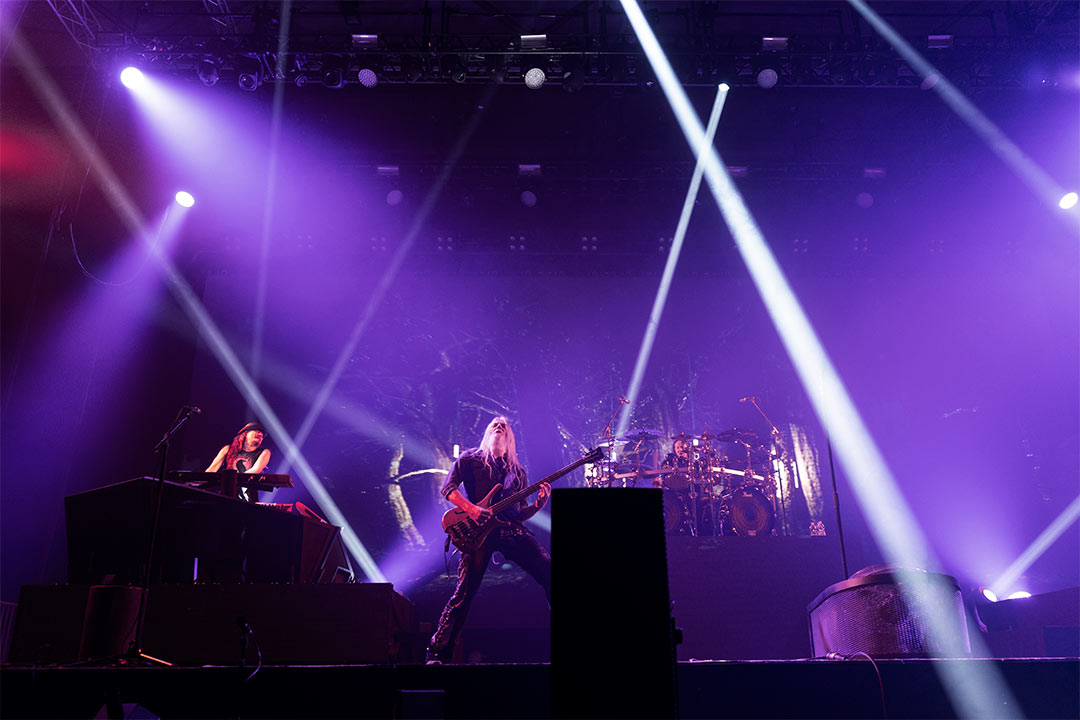 What is your creating process?

It always starts with a story, with the theme of the song. I don’t think I’ve ever done a single song just jamming with my keyboard, starting from a melody and developing through that. It’s always the other way around for me. I think: I need to write a song about long lost love, heartbreak, this book I read that’s really inspired me or any other topic. How would I bring this story alive? Is this a metal song? Does it have folk elements in it? Is it a ballad? Is it piano orientated or acoustic guitar orientated?

This is really fascinating, I really love this process of trying to find the perfect approach to tell that particular story. Then I write the music, and after the music is ready I write the final lyrics. After that, I kind of polish the corners again and again for months until I reach a point in which I can’t contribute anymore to the song. That’s when I present the song to the other members of the band and we start again from scratch. Sometimes, when I present the song to the band, they’re completely happy with it and it’s almost exactly how I imagined it originally. Sometimes it changes a lot. Maybe a guitar player might say “that riff’s not really good, how about this?” and then it’s perfect. Maybe Floor [Jansen, current lead vocalist of the band] changes the vocal line and it gets perfect. It’s a collaboration, that’s why we are a band.

There is some sort of cinematography within your music, it manages to take the listener to places. You have usually mentioned that some of the greatest film composers are an important influence for your music and you even wrote While Your Lips Are Still Red along with Marko [Hietala, bassist and vocalist of the band] for the Lieksa! soundtrack. Would you write a complete soundtrack for a film?

I wish I could. That has been a dream of mine for years, but it would need to be something that really strikes my fancies. I wouldn’t be interested in writing a score for a romantic comedy, it has to be something interesting. A nature documentary for Discovery Channel or even a really cool game, I’d love to do The Elder Scrolls VI, something like that. Anyway, at the moment Nightwish is, by far, my main priority, so that’s what I want to focus on for my near future. I can see myself in my fifties doing something like that, though, if somebody’s interested.

What live format do you think suits Nightwish best? Do you prefer more intimate gigs or larger crowds?

I think all of the different formats have their advantages and disadvantages. Whenever I go to see a show I like to get the sweat and slime of rock and roll in a closer interaction. Then you get to be in a festival or a stadium where you have the whole production with pyros, screens, etc. and there are 50.000 people screaming and that’s a whole another world.

I feel grateful that we have different sizes of audiences all over the world. In Europe we play up to 20.000 people and then, when we go to America, we play for 1.000 people at a club, so we try to get the best of both. I don’t think there’s an ideal setting for our band.

Do you have particularly fond memories of a stage or show?

There are so many, it’s difficult to tell.

The first time we played at Wembley was really something, it has a special aura. I don’t mean to brag, but being the first Finnish band to sell out Wembley was something else, it was very special.

On that same tour we played in Paris two weeks after the Bataclan terrorist attacks and that was maybe the most emotional show we ever did. All the people still came, there was such an intense vibe between the audience and the band. Everybody just came together and were happy in those two hours of music. That was very special.

What do you prioritize when you’re on stage? Do you focus on your own expression or on the crowd’s feelings?

Live shows are always an interaction. The better and the louder the crowd is, the better the feeling inside you. I never perform, I kind of forget who I’m playing to, half of the show I have my eyes closed just to really get into the mood and play the stories. I’m never performing or playing to them, but you definitely get an extra boost if you see that the audience is into what you’re doing. Sometimes you can just focus on one or two persons in the front row and, if they’re really feeling it, you start to feel it. It matters, it really does.

Of course, there are different personalities in the band. Floor, Marko and Emppu are really performers, they interact all the time, but that’s not really my thing. That’s also why, for this tour, I got to the back of the stage. I’ve been at the front for fifteen years, so I wanted to go back, play the songs and be in my own little microcosmos. That’s my forte. 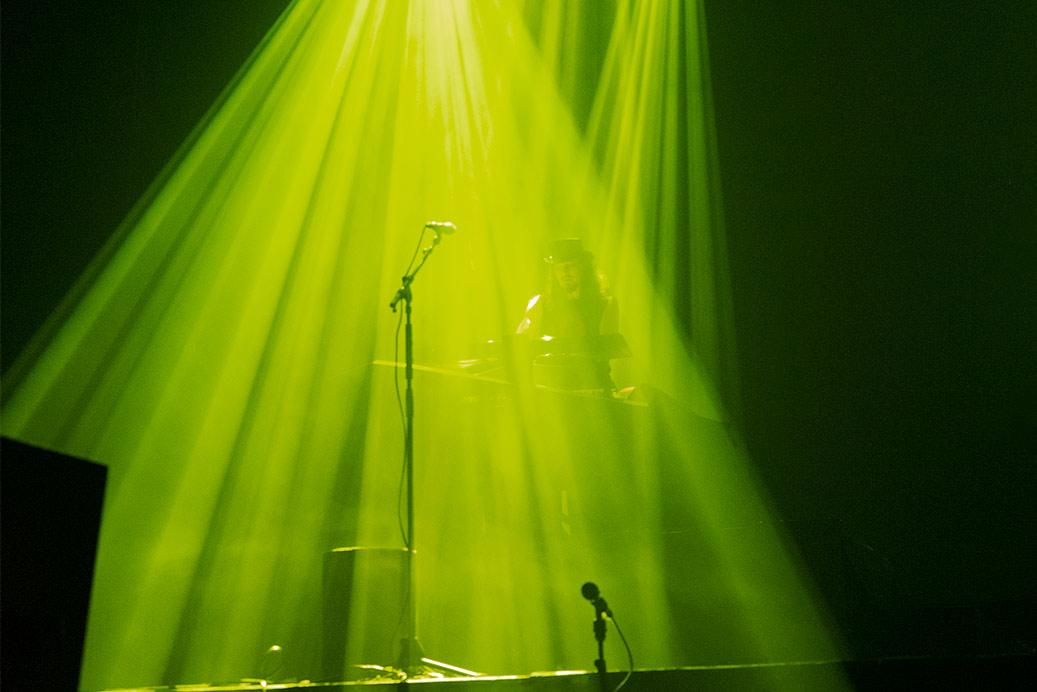 What do you still have pending?

I don’t think we’ve made our best album yet, so that’s the biggest ambition for me and the whole band. I think the best album and the best live show are still yet to come.

If you could choose anybody, who would you like to work with?

Two of my biggest heroes are Hans Zimmer and Vangelis, so either one of those. But then again I want to keep a bit of distance from my heroes.

Once, I was in Helsinki and saw Hans Zimmer live, then I got invited to meet him at a party afterwards but I declined. He’s such a big character for me and some part of me wants to keep it like that. A good example of this is that for my whole childhood Walt Disney was my hero, he was like a demigod for me. When I read his biography the world crumbled. He wasn’t a very nice person. For some people you want to keep the distance. So, to return to your question, if Hans Zimmer asked for a cooperation I would definitely do it.

If you could choose somebody for us to interview, who would that be? And what question would you like to send him/her/them?

Hans Zimmer, and I’d ask if he’d want to do something together with me. Or maybe the boss of Bethesda, I would ask if they already have a composer for their next game, just saying.

What tip would you give to a beginner?

Only do music or writing if the idea of not being able to do music is too hard to bear. That’s not from me, but from Gustav Holst. But I think it’s one of the best quotes ever.

Interviewing Tuomas has been a true experience, it is easy to perceive the depth of his thought even after a short interview. He truly makes one think about artistic growth and the importance of cooperating and sharing in order to create and improve ideas. Definitely, we are really thankful with Tuomas and Nightwish for this experience.

To conclude, I would like to send a thank you to Markus, from Nuclear Blast, Ewo, from Till Dawn They Count Management, and Bárbara, from Rock N’Rock.